QUEBEC CITY, April 10th, 2019 — Due to the excitement caused by the announcement of the unique event Jon Lord’s Concerto for Group and Orchestra on November 21st, 2019, Palais Montcalm – Maison de la Musique and Orchestre symphonique de Québec are proud to announce an additional date on November 22nd. For the first time in Canada and to celebrate the 50th anniversary of Jon Lord’s Concerto for Group and Orchestra (Deep Purple), the Orchestre symphonique de Québec, British conductor Paul Mann, lead singer Bruce Dickinson (Iron Maiden) and Paul DesLauriers Band will be performing together at Palais Montcalm. 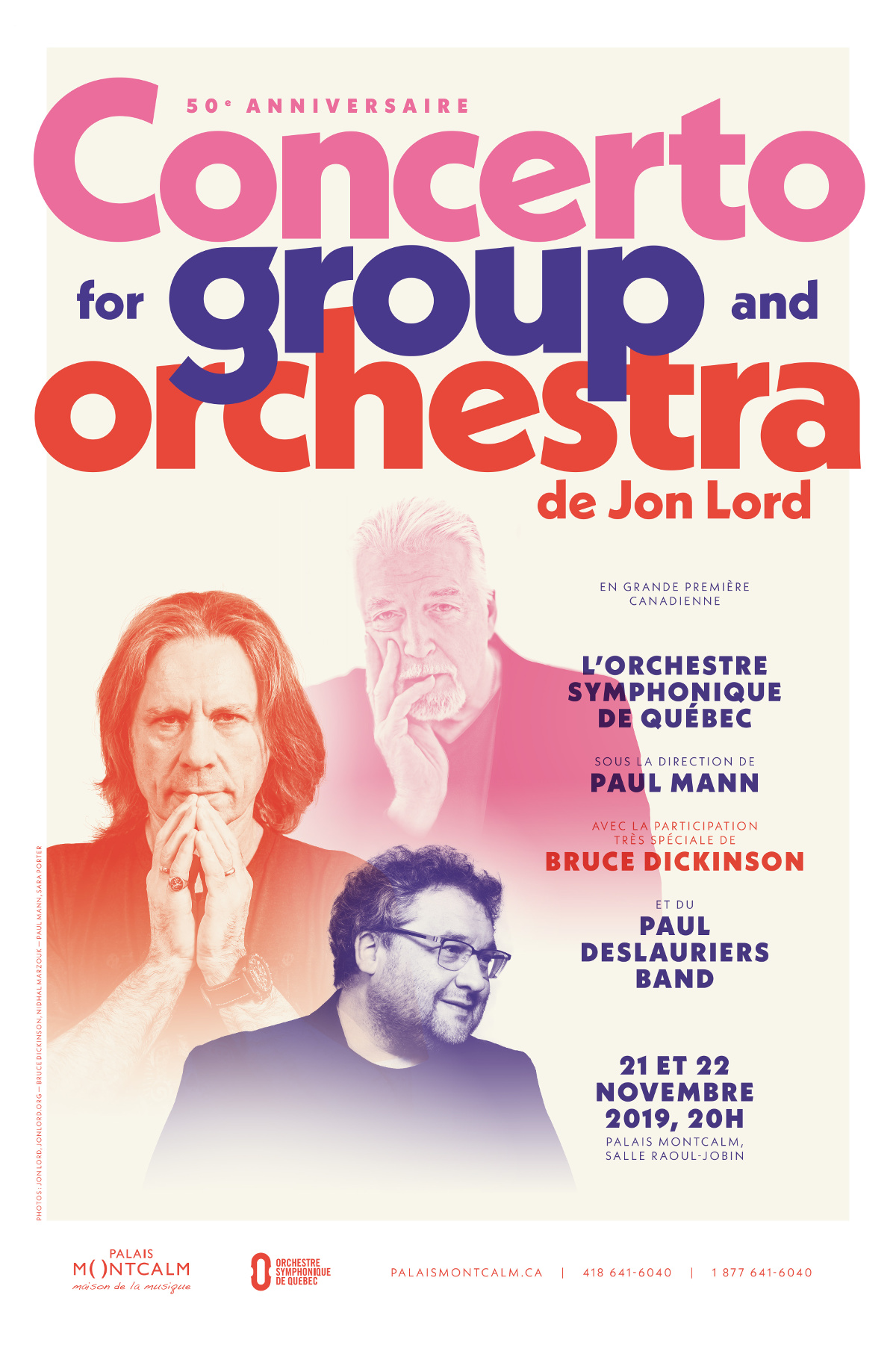 In 1969, Jon Lord made history by creating the very first concerto for a rock band and orchestra with Deep Purple and the London Royal Philharmonic Orchestra. Thirty years later, he revived his work with the London Symphony Orchestra conducted by Paul Mann. The recording of this remarkable performance, Live at the Royal Albert Hall, was a worldwide success.

In 2012, Jon Lord decided to record a studio version of the Concerto, along with his faithful collaborator Paul Mann and some very prestigious guests including Bruce Dickinson. Jon Lord and Bruce Dickinson even discussed possibly touring together at some point, but this project didn’t come to fruition, due to the unfortunate and premature death of the composer.

On November 21st and 22nd, 2019, the concerts at Palais Montcalm will make history, not only will Jon Lord’s work be premiered in Canada, but very special guest Bruce Dickinson will sing all the vocal parts of the Concerto for the first time and Paul Mann will be conducting this masterpiece for the 50th time! The Paul DesLauriers Band with Pierre Bélisle will also be part of these memorable performances.

“It’s a great honour to participate in the 50th Anniversary of the Concerto For Group & Orchestra. When Paul Mann contacted me about the Quebec event I said yes immediately. As many people know, Deep Purple have been a major, ongoing influence in my life since I was a teenager, and down the years I have been fortunate enough to become good friends with all of the band, most especially in my collaborations with Jon Lord. Right now, I’m still deciding on what to perform – so many great Purple songs to choose from! – and am looking forward to seeing everyone at this very special commemorative evening.” — Bruce Dickinson (Watch on YouTube: Bruce Dickinson discussing Jon Lord’s Concerto For Group & Orchestra recording in May 2012)

“My long collaboration with Jon Lord, and in particular his innovative, genre-defying Concerto, has been one of the greatest joys of my musical life. I look forward to bringing this piece to Canada for the first time on the occasion of its fiftieth anniversary. Jon’s spirit will definitely be with us.” — Paul Mann